KARACHI/ JAMSHORO (ENN) Jamshoro police and the workers of M-9 toll plaza (run by powerful construction organization of the country) scuffle during an attempt of arresting the toll plaza staff on Sunday as session’s judge was stopped for toll tax.

According details and video clips those went viral on social media, Jamshoro police (Sindh province) personnel was seen on run as Toll plaza staff ran after police mobile and a vehicle. 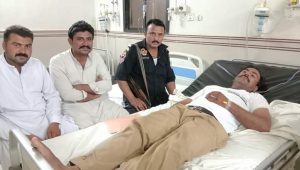 Beaten and injured by toll plaza staff, the Jamshoro police constable being treated in hospital. (ENN)

The toll plaza staff allegedly deprived policeman from their weapons as per video clip that went viral on social media.

According to police sources a session judge’s vehicle was stopped and allegedly misbehaved by toll staff on Sunday for toll tax and then said judge made call to SSP Jamshoro for an action against toll staffers.

SSP asked SHO Jamshoro for action but it resulted in back lash by toll staff by beating the police after their staffer was taken into custody.

Moreover the injured constable was admitted in hospital.

Efforts were under way by high ups of both sides to settle down the issue “amicably”, sources said.