NAUSHAHRO FEROZE (By Mohsin Hassan) It seems like a dream that the prison administration was celebrating Sindh Cultural Day in the prison with prisons and those were jubilant enough to celebrate the event. Yes this happened in the Naushahro Feroze Prison district in Sindh province where jail administration celebrated the Sindh Cultural Day (well known as Sindh Ajrak & Topi Day) being celebrated regularly since last decade throughout Sindh. 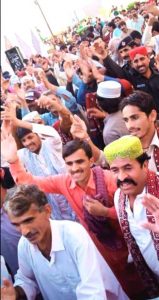 Sindh which has the tradition of over 6000 years and wearing ajrak and Topi had remained part of it. District Prison Committee led Abdul Shakoor Abbasi, Superintendent Prison Shuhabuddin Siddiqi and others decided to celebrate the day with prisoners. The event was attended by the Sindh Assembly member Mumtaz Ali Chandio, former Nazim (mayor) Abdul Waheed Abbasi and others; while singer Abdul Majeed Siyal, Abdul Raheem and others presented Soofi folk songs which were well celebrated by the prisoners.

The prisoners not only wore Ajrak topi but were seen dancing on the songs. Not only this but the Handi-crafts made by the detainees-under trial and prisoners were decorated there in the prison.

The speakers not only appreciated the organizing committee but said it would turn prison into an atmosphere which would leave positive impacts on the prisoners and they would become positive, peaceful and productive thoughts owning citizens. Sindh Topi and Ajraks were presented to guests and some prisoners as well.

It is pertinent to note that Sindh Cultural Day is celebrated on first December every year in Sindh and broad by Sindhis and non-Sindhi speaking Sindhis as well as Pakistanis. Abdul Shakoor Abbasi, the head of prison committee while speaking with ENNS told that since Mr. Siddiqi had taken charge we had been organizing various activities in the prison to bring positive change in the behaviours of prisoners.