The National Lobbying Delegation for Minority Rights, a group composed of several minority members led by Krishan Sharma, held a meeting with Sarwar at the Governor House and presented their demands on personal laws. 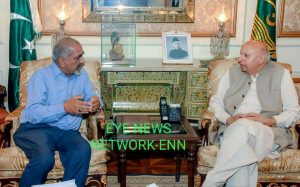 Governor Punjab listens to suggestions made by Krishan Sharma and others.

The Hindu Marriages Act was enacted in 2017 but since then there were no rules of business made and implemented which is why the Act was still not in force.
The community never had any laws to governor their marriage and other family laws.

The Delegation also presented a request for amendment in Christian Divorce Act 1869 and Christian Divorce Act 1872. These laws have never been amended since their enactment during the British rule.
Pakistan Tehreek-e-Insaaf has several times assured the Christian community that their personal laws will be overhauled.
Under Article 144 of Constitution, however, a provincial assembly can pass a resolution to delegate powers to the federation to legislate on such provincial matters.

Chaudhy Sarwar assured the Delegation that he would personally take interst to have a resolution passed by the Punjab Assembly in favor of amendments in the Christian personal laws.