Trending
You are at:Home»Languages»English»Moot stresses on the media coverage of marginalised voices for greater participation in electoral process

HYDERABAD (ENN) Journalists have developed consensus that media should report success stories of women leaders more effectively with gender lens for greater contribution of women in electoral process of Pakistan.

This was observed by working journalists during training workshops organized by Baanhnbeli in collaboration with Oxfam at Hyderabad and Kotri press clubs here on Saturday and Sunday. 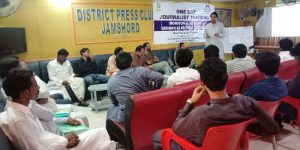 A view of training held at Kotri, Jamshoro. (ENN)

Participants were told that affirmative actions by the government have been taken for women participation in electoral system as Election Commission of Pakistan (ECP) is authorised to run awareness campaigns for women voter registration and five percent quota for women on general seats to be ensured by the political parties apart from reserved seats.

Journalists said that there was dire need to sensitize news rooms and decision makers regarding reporting on women issues particularly before and after elections. They were told that inspite of hurdles women parliamentarians have contributed a lot in terms of highlighting public interest issues. 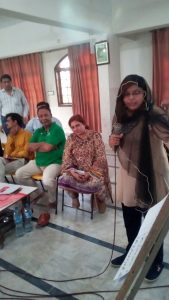 While sharing salient features of election act 2017 he told participants that in case of 10% variation in men and women voters in a constituency, ECP to take measures to reduce such variation; while ECP should annually publish disaggregated data of registered men and women voters.

They were told that in case if the turnout of women voters is less than 10% of the total polled votes in the constituency, ECP may order polling stations or election in the whole constituency void.

The trainings were organized by Zaryab Kaka, Rehana Leghari, Anwar Khaskheli, Kanwal Shah and other staff of Baanhnbeli, non-governmental organization.